Guest blog: There have been so many highlights being a CFR

Posted on June 12, 2016 by East of England Ambulance Service 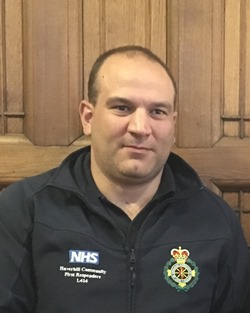 I have been a responder for five years, on average I do 96 hours per month.  I became a responder as I was diagnosed with an illness, and at the same time I saw an advert asking for responders. I felt that I could give my time to support the community and for people that needed help.

The highlight was the first heart attack patient I attended. He was having clear symptoms of a heart attack and then went into cardiac arrest in front of me and the paramedic. We got the patient back with one shock and then went off to hospital. Four weeks to the day I got called back to the same patient having chest pains and was able to give the ambulance crew a full history of the patient. Three years later I was fundraising in the town centre when I got a tap the back and this voice said ‘I want to shake your hand and say thank you for saving my life’.

There have been so many highlights, but it has to be when you get stopped in the street or supermarket and thanked for what you have done.

The feeling and personal satisfaction that what you have done has potentially saved somebody’s life, that can’t be put into words but is the best feeling.

The East of England Ambulance Service NHS Trust (EEAST) will be posting a blog from a CFR every day during national volunteers’ week, which runs until 12th June #volunteersweek #CFRtakeover

About East of England Ambulance Service

A Leverhulme Trust International Network on all things emergency related